Well since my Raps have once again torn the heart directly out of my chest, kicked it around a bit, like a soccer ball then picked it up and fired it right into Lake Ontario, it’s time to breakdown the final four teams left standing in the NBA Playoffs.

I cannot stand cheering for any team from Boston (unless it’s the Patriots) but the only team I hate more than the Celtics are the Cavaliers, especially because of LeBron. Do I think Boston has a chance against the Cavs? Slightly. Do I think it’s going to be a Cavs/Warriors final for the 4th consecutive year? Most likely. But let’s talk hypotheticals here, let’s say maybe the Celtics are the real deal and not just a sideshow in Lebron’s Eastern Conference. We know for a fact that coaching wise the Celtics are above and beyond the Cavaliers in every way, shape and form. I mean Brad Stevens resembles some sort of mythical being based on the fact that it is unbelievable what he’s been able to do for a team without their two best players. Through my eyes, in these past two years he has been the best coach in basketball, hands down. The way he has done a stupid amount with so very little help is astounding, it’s honestly out of this world. If he is able to stay consistent and continue to manage this team the way he has I truly believe he is the next Gregg Popovich. The only thing Pop has on Stevens right now is more wins, rings and he’s stayed consistent for so long but I see all of those things coming in Brad’s near future. The other stories around the Celtics have been the great play of their young 3rd overall pick, Jayson Tatum and the amplified performance of “Scary” Terry Rozier. With these two players leading the way, Boston has been able to squeak by a tough Bucks team in the first round with a Game 7 blowout and cruise by the young Sixers in the second round with a polite gentleman’s sweep (4-1). I will pray for this Cavaliers upset every night before bed but I will not have faith in any team (besides the Warriors) to beat Lebron James in a playoff series, until I physically see it happen with my own two eyes. 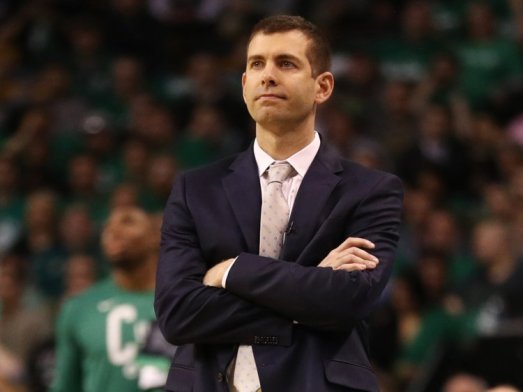 What more can I say about this team then what I have already said. Lebron facilitates absolutely everything. He’s the point guard, shooting guard, small forward, power forward, center, coach, ref, broadcaster, this isn’t even exaggerated, he RUNS everything! I am not even interested in speaking about the Cavs anymore after the beating they put on Toronto merely days ago, but here is the fact of the matter. As long as Lebron James is still breathing, he will be the biggest individual threat in the NBA. All he really needs from his team is for one of his supporting cast members to have a mediocre-good night; JUST ONE! Kevin Love goes for 18 and 12, Cavs win. JR scores 20-25 points, Cavs win. Tristan Thompson remembers how to play defense, Cavs win. It’s that easy and until someone (possibly Brad Stevens) game plans against it and proves me wrong, I will not choose to believe anything else.

Cavs over Celtics in 6 but my heart really wants Boston to upset Lebron and his band of Cleveland chumps.

I do not get to catch as much of the Western Conference Playoffs as I would like but I will base my opinions off of what I have seen, basically over the past 3 years from these next two teams. This year I genuinely think the Rockets are bad news bears but most of their offense is based on isolation ball with either James Harden or Chris Paul, which is fine. They have been successful so far with it and maybe they can continue to carry that success through the mighty Warriors. I doubt it, but maybe. The main problem I see with the Houston Rockets is their defense. You have to be able to guard 4 All-Stars all at once and I do not know if they have the defensive fire power to do so. Let’s say for argument sake, its Rockets starting 5 vs. the Warriors death lineup. Paul-Curry, I can live with that. Capela-Green, that could work too. Tucker-Thompson, decent matchup but if Klay gets hot, he can take over an entire game so keep that in mind. Harden-Iguodala, really the only matchup you can put Harden on with his terrific “Ole” defense. And finally Ariza-Durant, MISMATCH! There is not a strong enough five you could put on the floor to stop the Golden State death lineup and that just is how it is for any team. They have managed to keep such a close core together for so long while also adding Kevin Durant and it’s preposterous. This team is pretty much unstoppable and unless a miracle happens, the Warriors should come out on top in this series.

When the NBA Finals rolls around again this year, I would expect as a basketball fan to see the same matchup we have watched for the past 3 years and only hope we can get a good series and not the embarrassing one like last year’s finals. When picking a winner or a team to cheer for, I always find myself flip flopping back and forth. The first meeting I wanted the Warriors to win cause of my pure hatred toward Lebron James and also based on how strong of a season Steph Curry had out of pretty much nowhere. They prevailed. The next season I was leaning more towards the Cavs because I did not want to see the 73-9 Warriors, who were in debates to be better than the 96′ Bulls, pull off the ultimate season. I was on the right side of things again. The finals in 2017 I was back on the Cavs train because the acquisition of Kevin Durant ruined the NBA and I wanted someone to regulate it. Unfortunately, I was on the wrong side of things in that one. But this year, I am not holding anything back, I want the Warriors to walk all over the Cavs. Screw the entertainment, screw the last minute buzzer beaters, screw the back and forth competition. I want to see a completely one-sided affair turning Lebron’s finals record to 3-6 and bringing home another ring for Steph Curry and the boys. 2018 is the ultimate year of Lebron hate and I am making it known.

Warriors in 5 over the Rockets.

Warriors in 4 over the Cavs.